Review First is becoming a podcast!

At long last, I finally have a microphone!


I've been toying with the idea of creating a vlog or podcast to accompany the Review First blog page and bring it up to speed a little bit. As much as I love writing my blog, I'm much better at talking in person, especially when it comes to music. The microphone was purchased as a gift from my boyfriend to finally get me into gear!


I am super excited to start podcasting. Before I do, I just need to write up a podcast layout and teach myself how to use Audacity software to record and edit my podcasts. I love learning new things so I'm looking forward to watching hours of YouTube tutorials on how to do this (any advice is welcome)!


What would you want to be included in the 'Review First' podcast?


Some ideas that I have so far of what to include in my podcast (in no particular order and the podcast will probably adjust to different topics each week) include:

If you have any other ideas that you think would be great to include in the podcast or a featured podcast then please let me know! You can drop me a message on Instagram at katie_norris96 or email me at katieajnorris@gmail.com. Most importantly be sure to go and follow my Review First Mixcloud account as this will primarily be where the Review First Podcast will be uploaded: https://www.mixcloud.com/Reviewfirst/

Review First launches into 2018! For this year, I will be looking at starting up a vlog to post on my blog page, as soon as I find a decent camera to use. This will likely mean a YouTube channel as well, so lots of exciting prospects in the pipeline.

All in all, I hope 2018 brings a continuous flow of new music and artists. Hopefully my search for a camera will be complete, and I can begin the Review First vlog and YouTube channel! Be sure to follow my page to find out my top 5 TV and film soundtracks.
Posted by Unknown at 16:30 No comments: 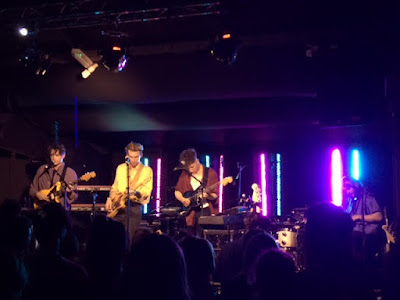 Touring around with Clean Cut Kid at the moment are this intriguing band called Marsicans! Last night they really warmed up the crowd with a few of their songs. The event was based in The Loft in Southampton which had a great intimate atmosphere about it.

In terms of music, Marsicans have a versatile range of songs. The lead singer James has a particular charm with vocals, with a mixture of elements similar to lead singer Matt from the 1975, combined with Kieran from Circa Waves. The rest of the members include guitarist Oli, Rob on bass and keys, and finally Cale on drums, who was noticeably great at head banging! Together the band collaborate exceptionally, and seem to fit together like a jigsaw puzzle both visually and musically.

One song in particular that seemed to have the crowd moving was 'Swimming'. This really seemed to show what the band is made of and quickly gets stuck in your head! All of the tracks had different qualities about them that made them unforgettable. Listening to them would be highly advised if you are looking for a fresh and upbeat band. Overall, definitely a band to watch out for.

Email ThisBlogThis!Share to TwitterShare to FacebookShare to Pinterest
Labels: Reviews

'Fallen so Young' and 'Better'

Declan J Donovan has such a charm in his voice! There is something elegant and so relaxing about it. Coming under the genre of acoustic pop, his two current songs 'Fallen so Young' and 'Better' flow particularly nicely one after the other. Pieced together with a slow guitar element, 'Fallen so Young' is great to put on when wanting to sit back after a long day. The song 'Better' is equally as beautiful, but has a bit more attitude to it. The emotion in both songs is perfect. Declan is evidentially talented with even the likes of Rita Ora showing some love for his track! Cannot wait to see more of what Declan is capable of in the future.
Posted by Unknown at 14:46 No comments:

A look at her new album Witness

Listening to Katy Perry's new album 'Witness' , you can't help but sense maturity in her work. By maturity, I mean that she seems to be in a transition phase from cute fluffy kitty next door to new world domination as a lioness! Long gone is the sweet innocence of California girls with sugar coated costumes and long flowing hair. Here we see Katy take the reins with her new style both in physical appearance and musically.  This album speaks out on many levels with Katy claiming some serious power. Excuse the pun; this is the title of one of her new songs on the album.

Katy's lyrics talk about being a "goddess" and after Swish Swish, I don't think a goddess I would want to mess with in the musical world right now. There are some tracks on the new album that resemble her previous work. However, most of her tracks seem more bold and outspoken than before. Could it be the so called feud between her and Taylor Swift that has ignited this new found style for Katy? Or is this simply Katy exploring a new sound for herself and showing some musical diversity? Either way, there are some great tracks on her new album and it was an interesting listen!
Posted by Unknown at 08:01 No comments:

Review First is both a blog as well as a radio show that was held every Friday evening on Surge Radio. Written, produced and presented by myself, each week for my show I hunted down the newest artists with a variety of styles played on air. The main idea being to promote those artists who are currently uncharted or not played on mainstream radio.

Sadly I was unable to make the Surge Awards last night, but received fantastic news that Review First was selected as Highly Commended for Best Specialist show! This award was judged by Radio 1 producer Alex Rogers. It was a brilliant way to finish my time at Surge Radio now that I graduate from the University of Southampton and leave behind my university radio station.

The blog will continue and hopefully in the near future Review First can return to air.

Thank you to everyone who reads the blog and listened into my show, and a massive congratulations to everyone who won an award and entered.
Posted by Unknown at 04:43 No comments: 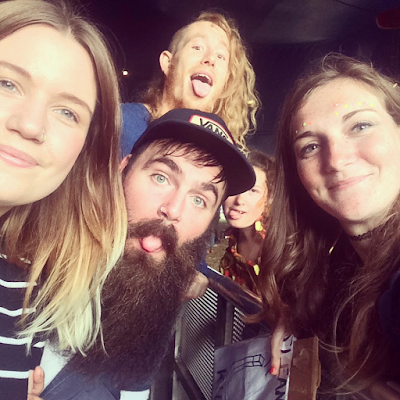 Clean Cut Kid have released their album and it is just in time for summer!

What a year this band has had! I first interviewed them back in 2015 at a venue that held probably no more than 100 people as they toured supporting Fickle Friends. Now one year later, they have just begun their own UK tour and dropped their newest album, Felt. Waiting patiently for this album was very much worth it, it does not disappoint.

As well as including some of their older tracks which have now been remastered, there are plenty of new tracks which live up to expectations and more. The great thing about this album is that there is a song for pretty much every occasion. Driving to the beach? Play vitamin C. Feeling a bit sad and mellow? Play Brother of Mine. Sat in the garden having a BBQ? Play Pick Me Up. You get the picture, this album has everything it needs.

I often wonder what it is about this band that makes me enjoy listening to them so much. Most people might just say "well they are just good" or "I like their music", but for this band I think it is definitely a collection of features that makes them so enjoyable to listen to. You can tell each song is carefully prepared and has meaning to them personally, which I think can sometimes be lost in this musical day and age. This is far from the case with this band and that is what makes them so captivating to listen to.

5/5 for this amazing band. Fun, original, and more 'clean cut' than ever, I cannot wait to see what is next!
Posted by Unknown at 04:41 No comments: